Blog - Latest News
You are here: Home / Blog / Blog / The Gift of Walking 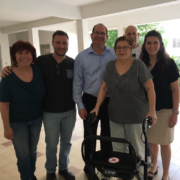 If you are a customer of ours, it is likely that you have been impacted by Parkinson’s disease in some way. Whether it’s a spouse, a grandparent, friend, or patient, watching someone suffer the symptoms of Parkinson’s can make one feel helpless. One of the biggest reasons why I created U-Step was to actively do something to help. Giving someone with a neurological disease the gift of WALKING – something the majority of us take for granted – is a feeling like no other.

Several months ago, we launched a new UStep website. The process of finding the right company to work with to update our site took much consideration but we finally settled on a company who then subcontracted the work to a website designer named Gabi Schnaider.

Gabi, it turns out, had a vested interest in building the website because his father, Pablo Schnaider, had Parkinson’s Disease. Gabi was already familiar with our company because he had done his research and purchased our Lasercane for his father several years prior. As this was uncovered, we knew we had found the right man for the job. In addition to having all of the right web development skills, he also understood the heart of our company.

The development of our website extended over a year as we figured out what we wanted and pulled together all the various components we needed.  During the course of the development, Gabi’s father, unfortunately, passed away. As you would expect, he was overwhelmed by sadness and a sense of helplessness upon the passing of his father. Even months later, Gabi was not the same.

We continued on with the project and towards the end of it, Gabi shared once again his sadness over losing his father.  I knew how unbelievably close they were, and having lost my parents, I was able to relate and feel his pain. What could I do to comfort him?  Out of the blue, I said to Gabi, “your father was a very good man and I would like to donate a U-Step Neuro to someone with Parkinson’s in his memory.” Gabi quickly got back to me and said that he would take me up on my offer – it was taking a negative situation and turning it into something positive.

Gabi and his family were active in the Parkinson’s community and without having to search too far, they decided to provide the U-Step Neuro to a former neighbor, Linda  Burdman. Once that was decided we quickly arranged a time and place to meet – we didn’t want to waste a single minute. I came with my daughter and we met Gabi’s mother, his sister, and of course Linda and her husband.  We sat around having cold drinks and got to know each other. Gabi shared pictures of his father and extended family with us. It was cheerful, comforting and relaxed.

Finally, it was time to introduce Linda to the U-Step Neuro. I adjusted the walker to the suitable height for her and explained the basics about using the product and we decided to go outside where there would be more room to walk. As we were approaching the door, I quickly noticed Linda’s gait pattern – short shuffling steps.  At that point, I stopped her and explained to her about the cueing module that projected a red line of the floor to address her Parkinson “freezing”. And suddenly – she started to really walk – with healthy steps and a normal speed.

Even though I am the designer, to see a person dramatically improve in seconds before my eyes never stops feeling like anything but a miracle.  Mrs. Burdman became comfortable with the U-Step in minutes. She figured out quickly how to use the reversed brake – squeeze to go and let go to stop.  She had limited endurance and very quickly learned how to pivot to sit down.

It got very emotional. Linda while sitting on the U-Step Neuro, was hugging everyone!  She was so happy. Out of the corner of my eye, I saw Mrs. Shnaider – look up to heaven and say, “Pablo – this is for you!”  We ended up taking pictures and shared some delicious strudel while going over the finer points of using the U-Step Neuro. It was an uplifting moment for all those involved.   Reflecting on this experience, it is a blessing to be able to help someone in need and see how it can help raise our spirits during our own sad moments in life. I am certain that Gabi becoming our web developer was no “coincidence”.

Have you seen a U-Step Neuro or Lasercane change someone’s life right before your eyes? Have you had your own experience where you knew something couldn’t be “just a coincidence”? Share your story with us.