How U-Step Got Started

You are here: Home / How U-Step Got Started 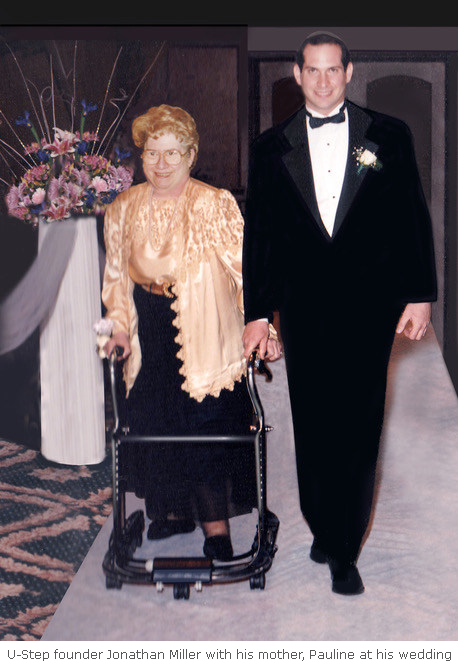 The U-Step Story: How the Company Began

I grew up with a mother who had trouble walking. She was born with a rare Muscular Dystrophy Disease called “Charcot Marie Toothe”(CMT). As a result, she had slightly deformed legs, club feet, and poor muscle tone. She was born in 1928 and back then, they couldn’t understand what was causing her problems.

My mother underwent multiple surgeries on her legs that probably did more harm than good. I have no childhood memories of running with my mother, or walking very far. Normal activities were hard for her, I remember as a teenager, there being a discussion over whether she could walk a mile to our synagogue for the Jewish High Holidays. Despite her condition, life was normal. My mom was limited but she was still functional and present in our lives but once I hit my early twenties, her walking got progressively worse and she could no longer walk without holding onto something.

My mother finally came to the realization that she needed to address her mobility issue head on. She went to physicians, therapists and an orthotist who all specialized in walking. She sought the assistance of all the right people, yet after ten weeks of therapy, thousands of dollars in leg braces, and a standard walker, she was not doing well. She made peace with wearing leg braces but to add insult to injury, they were too cumbersome to use and very uncomfortiable.

I have a clear memory of a time I was home with her as she struggled with her hardware, ending in a breakdown and complete frustration. When I saw her defeated, just in that moment, I knew that she – we – had a problem. My mom was always a fighter who had persevered through so many challenges, yet it was the devices meant to “help her” that she simply couldn’t handle.

I started to pay more attention and I realized that my mom needed my help. My first realization was that the walker she was using was not able to support her adequately.  I began to look for a better walker and I tried a few with wheels but it was still too hard for her to control herself. It was hard to believe that there was not a single walker on the market that could meet her needs. I began to wonder if I could design a suitable walker for her myself. I had never done anything like this, but having grown up with a father in engineering, I was not afraid to try.

As I began to draft the concept, I began visualizing what a walker would need to look like, in order for it to be as stable as holding onto a wall or someone’s arm. The first thing that came to mind was a stable base. A base that could surround my mom – this is where the U-shaped base came from. Having a U-shaped base, allows the user to be completely surrounded, increasing support and stability.

A few days later, I started to fashion the first “U-Step” in my mom’s basement. I did not have the tools or skills for working with metal so I stuck to wood for everything but the water pipe handlebars. I worked with power saws, drills, and sanders to fashion the U-shaped base. It sure wasn’t pretty but, I was on my way to having a working prototype. I remember bringing it upstairs for my mom to try it. She grabbed onto the handlebars and stood up and started to walk!

My mom started using this primitive walker around the house and it did the job. I created a braking system and made it sturdy enough that she was able to put some weight on the handlebars to keep her knee from buckling. She no longer needed leg braces and she was walking with just the help of this walker. I found the results to be amazing! I was thrilled to have an actual, functioning solution to improve my mother’s life.

The only issue was… this walker was UGLY!

I contacted a metal fabrication company to produce a more refined version of the “U” shaped frame – that in the end cost me over $2,000 to make. After all of that work and expense, my mother had a presentable walker to use in and out of the house. Success! I was relieved that my mother got back some of her independence.

The story could have ended there but not long afterward, my mother was using this walker at her internist’s office. Dr. Weiss took a long look at the product and how my mom did with it and said: “This could help a lot of people.”

It took about a year, but I used the money I had saved since graduating college and completed my first production run of ten units. Those ten only cost $600 a piece and I was able to sell them for only $395 a unit. I managed to obtain an SBA loan for $60,000 to pay for a production run of 50 units, which took me a full year to sell and break even. With no money left to go on, I started to get creative about funding; I put about $40,000 on personal credit cards (over which I am still waiting for my wife’s forgiveness).

My big break came when a very satisfied U-Step customer asked me about the business. Her husband (a successful businessman), and his investment group put in enough of an initial investment to really get the ball rolling. It was time to find a manufacturer able to produce our product at a much lower cost, at which point, I could finally start making a living.

I had one more big hurdle to overcome: I had a brand new product but I did not know how or who to market too . My first instinct was to meet with physical therapists to educate them on the product and have them prescribe it. As I did, I heard from many therapists that they all thought the U-Step would be great for their Parkinson’s patients. That, combined with an article in a Parkinson’s newsletter, jump-started sales to the Parkinson’s community. We became a Medicare provider and we also sold directly to patients.

My mother used her U-Step for over ten years before passing away. It kept her up and walking and in her own home, which is what she wanted. Every time I receive an email from a physical therapist, U-Step user, or a customer’s caregiver about how our walker has changed someone’s life, I think back to my mother and think that in her merit, so many people have been helped.

I tell all of my employees to treat our customers like they would treat their own mom. It is also why I never stop at “good is good enough” with our design. The U-Step has been through many redesigns to make the product the best possible.

Years later, I ran into my mother’s doctor, Dr. Weiss – who had originally coined the name “U-Step” – and I thanked him for his initial encouragement. When I decided to study business in college, I could never have imagined that through the pain and struggle of trying to help my mother, I would “stumble” upon a business that would give me such a sense of purpose and satisfaction. I feel blessed to work in a field that I am passionate about and that I can help people avoid falls and stay independent.